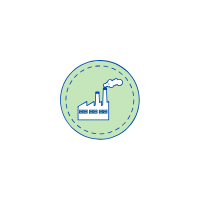 Regardless of the industry you work it, you need a certain set of supplies to do your job. If you work in the plastic manufacturing industry, for example, you can't create items without a series of molds and injectors. if you work in the welding industry, you need sticks and protective gear to have a productive day. As you can imagine, knowing which supplies you need and how to obtain them is half the battle. You can pick up on some of those details as you dig into the content provided here. This website is your resource for all topics related to industrial supplies and equipment.

The standard name for a metric fastener follows a basic formula. The formula can be thought of as M(a)-(b)(c), where each of the lowercase letters is a different numerical variable. Letters "a" and "c" are typically expressed as whole integers, and letter "b" is usually stated to the tenths.

For example, a metric fastener might be named M6-0.8x15. This name will be used below to understand what each of the different parts means.

The first number immediately follows the M, and it details the fastener's diameter in millimeters. The higher the number is, the thicker the fastener will be — and you'll need a fastener that has the same diameter as the hole that you're securing it through.

The hyphen is merely a placeholder that makes the name of a metal fastener easier to read. The mark serves no purpose other than increasing readability. It does make long lists of fastener sizes much easier to peruse.

The second number follows the hyphen. This number expresses the pitch of the fastener, which is the distance between the fastener's threads. The number is given in millimeters to the nearest tenth-millimeter.

The third number of the fastener's name is the length of the shaft, again expressed in millimeters. The shaft of the example fastener is 15 millimeters long.